“I love inventing names, but I also collect unusual names, so that I can look through my notebook and choose one that suits a new character.”  — J. K. Rowling 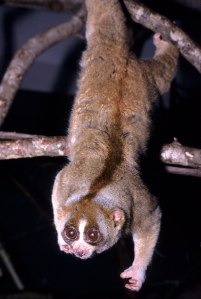 I like the sound of words, especially names, and they make me curious. The slow loris is a genus of nocturnal, slow moving, slow reproducing mammals, mostly in Southeast Asia and the nearby islands[i]. All the identified species are listed as “vulnerable” or “endangered.” Borneo loris, Bengal loris, and Pygmy loris are some of them. We should be comforted that we are free of any known Fast loris or Giant loris species.

When we think of venomous creatures, what comes to mind are invertebrates like scorpions, Australian box jellyfish, and brown recluse spiders, or maybe vertebrates like copperheads, king cobras, Gila monsters and Mexican beaded lizards. The slow loris is the only known venomous primate (primates include chimps, silverback gorillas and Irishmen.)

This unique primate slow loris bite can cause acute allergic reactions and is a devil of a bite to heal – the toxin eats away flesh and prevents the body from mending itself properly, and sometimes their bite can be lethal to humans.  A bizarre aspect of their behavior is what precedes the thing biting you: it licks and sucks its elbow. The interaction of saliva and the venom sucked out of a hidden elbow patch is then amplified in its toxicity by the creature swishing the mix around in its mouth prior to chomping you.

If a slow loris you meet goes for its elbow, run. Fast. At least they probably will not be able to catch you.

“We are only falsehood, duplicity, contradiction; we both conceal and disguise ourselves from ourselves.” – Blaise Pascal

Our new presidential appointed climate change czar John Kerry was asked after the first day of the new administration how he believed the people who lost their 11,000 jobs due to the cancelling the XL pipeline in the Day One executive order could be helped. His answer was a masterwork of aloof cluelessness. Of course, he said, they should get jobs in solar plants.

Flying all over the planet in his family’s private jet that dumps hundreds of thousands of pounds of carbon into the atmosphere every year, it is easy for him to have missed what life is like for those who drive a well-maintained pickup with 165,000 miles on it to work. A pipeline welder – like the many other skilled craftspeople it has been my privilege to know over decades in construction and tree work – works long and hard for many years perfecting their craft, deeply identifies with the prestige their skilled job provides and takes great pride in employing those skills carefully to support their families. Welding pipe sections together so they last for many years without leaks or breakdown is not a trivial skill. A union pipe welder will average about $69,000 a year. Not a fortune like

marrying into the Heinz family, or the six homes, multiple yachts and private jet Kerry and his wife own, but a solid, well earned income: enough, if one is prudent, to support a family, a mortgage, and maybe a modest annual vacation in a small-rented cabin or campsite for a week. The average worker in a solar plant makes around $40,000, and there are not many solar jobs in the states where the pipeline was being built. So, uproot a thousand miles and get your pay cut by 40%. Sounds reasonable. Why should they be upset?

To a progressive elite on a grand mission, taking a 40% bite from their income and inflicting a heartbreaking blow to the dignity of some stranger whose life is incomprehensible to that visionary, and most likely just a “deplorable clinging to guns and bibles,” is a bit of the collateral damage necessary for the greater good when one is saving the planet.

The Biden executive order may run into some significant speed bumps, one of which contains some high political irony. There are legal concepts relating to reliance expectations[ii], and not to drift off too far into the underbrush, they were upheld in 2020 by the Supreme Court against the Trump administration decision to stop the Deferred Action on Childhood Arrivals (DACA) immigration policy. The 2012 Obama administration policy, while not providing a direct path to citizenship, eschewed deporting the so-called Dreamers who came to the United States illegally as infants or small children. Having lived for all practical purposes their whole lives in this country, been educated here, and built careers here, I think most reasonable and compassionate people would agree with some version of the policy. The Dreamers had expectations to continue their life here under DACA. The great majority of them were earning their way, raising families, paying taxes, and doing what all legal citizens do to better the society.  The Supreme Court agreed and ruled that under DACA protection, those folks should be able to rely on their reasonable expectations to not have their lives torn apart by immigration enforcement.

Well, it can be argued that union pipe welders, the Canadian oil trading providers with long-term purchasing contracts with refiners, and the multiple construction companies which geared up to fulfill signed contracts to build the XL pipeline extension have similar reason to rely on expectations to continue what they agreed to do and count on those promises without major disruption. I am not an attorney, but litigation is pending, and a court decision will probably resolve this executive action as well.

“To win the people, always cook them some savoury that pleases them.” Aristophanes, The Knights

But we sensibly ask, what of the executive action itself? Does it help our beleaguered planet to clear up its air? Plainly, many of the first day executive actions were prepared in advance to placate some of the more strident elements of President Biden’s awkwardly stitched together constituency. The XL pipeline order made a great headline in Mother Earth News. The XL pipeline had been put in place as the final connection from the Alberta oil fields to a much larger existing pipeline that runs from Nebraska to the refineries on the Gulf Coast. Long planned, construction was well underway.

For some perspective, more coal plants were shuttered under the Trump administration than any previous four-year period, and in 2020 for the first time since 1880, more electrical power was generated by renewables (wind, solar, hydro) than coal. All planned new plants in the USA to replace obsolete or closed plants are already ticketed as natural gas or renewables, with the majority renewable. However, unless all of us are willing to forgo our SUVs, pickups, and basic transportation, shut off our air conditioners and refrigerators, take cold showers, and ride horseback to visit relatives across the continent, we are going to need natural gas for electricity and fuel for our non-electric cars and jet planes for the foreseeable future. The trajectory driven by both economics and environmental concerns happily is and will continue to be to cleaner energy, but it is not going to be an instant transformation. The oil from the Alberta oil fields will be used irrespective of how it gets to the refineries.

The Biden executive action must be urgent though and will provide a safer means of transporting the crude oil the 1,179 miles from the Alberta sand oil fields to the existing pipeline head in Nebraska, right? More chance of spills with pipelines than trains or trucks, right? All the data shows pipelines, most of which are underground, are 4.5 times safer[iii] with fewer safety occurrences than those other means of transportation, and 70% of those fewer pipeline incidents have zero actual spillage or less than a cubic meter.  So, safety to those on route or to the environment is not addressed in the executive order.

Well, then, how about carbon emissions in the transportation process? This must not be just political posturing and ideological pandering, right?  Cancelling the pipeline saves the planet, right?  The pipeline would carry 830,000 barrels of oil to be processed into the fuel we need every day. Trains are better than trucks for safety and require less energy (and carbon emissions,) so we will use those best-case metrics. Trucks would be worse. The railroad industry boasts it is four times more fuel efficient than trucks.

A rail car carries 650 barrels. A barrel of oil weighs 300 pounds.  That is a lot of weight to transport. The largest allowed train is 100 cars, so it would take about twelve and three quarters full trains every day to take up the missed pipeline slack. These calculations do not consider what it takes to return the empty cars for refill, or idling cars and trucks stuck on rural railroad crossings while the long trains go by. The data to feed the calculations are readily available from various public sources, and I will not make this any longer by going through the detail on my spreadsheet, which is available, if you have interest. Trains use diesel fuel to pull their loads. The results are that moving all that oil from Alberta to Nebraska will blow about 3,340 tons of carbon dioxide into the atmosphere. A day. About 1,218,514 tons of carbon dioxide a year for decades that would be saved by building the pipeline. So environmental damage is not addressed in the executive order. It is a false flag project, a green initiative in optics and headlines only.

So, if you are a green advocate, or a skilled union pipe welder, or a Dreamer, and you get to meet a president or an energy czar some fine day, that will be a memorable moment for you. But I caution you, always remember the slow loris that started this post. Unlike what the taxonomists tell us, that creature is not the only venomous and deadly primate. If that politician walking over to greet you sucks on his elbow, run for the door.

[i] More slow loris information for the insomniac.

Filed under Politics and government