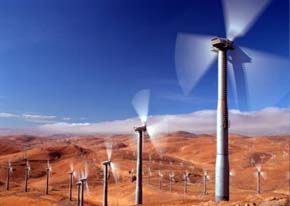 Wind turbines appear from a distance to rotate anywhere between indolent and enthusiastic, but in close their lethal potential is apparent.  Perfectly balanced atop a two hundred and fifty foot tower, three graceful blades encompass a diameter of nearly one hundred and forty five feet.  At the tips, they crush through the air at nearly one hundred miles an hour.  To steady powerful torque, the tower is anchored in tons of concrete.  Their whistling has been compared to the sound of a rapidly flying duck close over the water, only louder and incessant.  Clustered wind farms, located in geography with steady Class Four and Five winds, drive neighbors and wildlife to distraction.  The base of a typical tower well north of Cheyenne is littered with corpses of dead birds and bats, including sage grouse, which finds half of its North American habitat in Wyoming.  Since steady winds and large human populations are usually not found in close proximity, hundreds of miles of high voltage towers are necessary to transmit the electricity.  The wires and wind farms disrupt the routes and winter feeding grounds of migratory mammals such as antelope, elk and bison.  When the wind is becalmed, there is no power; when demand is not required for the grid, the spinning is fruitless.

The point is not that this means of generation is tilting at windmills, but that any source of power carries an environmental impact and is imperfect.  A coherent energy policy continues to elude us.   “Green” advocates condemn all power generation that consumes fossil fuels, but the alternates do not provide an answer in the midterm future.  When total expenditures for various methods of power generation including construction, fuel and production costs, waste disposal and decommissioning at the end of their effective lifetime are tallied, the costs per kilowatt hour and the percentage each represents of U.S. total generated power are as follows:

Given the percentages of our energy derived from hydro carbons as well as their cost advantages, it is not clear how they could be supplanted by renewables hastily without profound economic disruption.

Nuclear and hydro have their own limitations. Carving out hydro dams is disruptive, interring whole towns under millions of tons of water, and the site opportunities are limited.  Although spent nuclear fuel can be reprocessed with 99% efficiency, eventually waste has to be safely stored and sealed for centuries; Chernobyl, Three Mile Island and Fukushima remind us that human error or uncontrollable natural events can visit catastrophe upon wide areas.  Biofuels have been a disaster of rainforest depletion and higher food prices for those most vulnerable.   Solar cells require energy intense manufacturing similar to computer chips, and the mining of silicone and other minerals has its own inherent environmental degradation.  A solar cell must produce for almost a third of its projected life to “pay back” the energy consumed in its manufacture.

The controversy over the Keystone Pipeline and the process of horizontal drilling and “fracking” is yet another unresolved opportunity.  The enormous reserves of natural gas and oil from shale deposits in the United States and Canada have the potential to give us time to let economic forces develop alternative sources.  Yet, we remain deadlocked and even insult our friendliest neighbor.  Canada will sell their gas and oil; whether they sell to us or build an alternate outlet to their western harbors to ship to China remains to be seen.

“Fracking” may create some problems for aquifers, but the findings in Wyoming, Pennsylvania and Texas are to date inconclusive.  The only compromised well water appears to be in remote areas where old mines were revived with the process much shallower than is being done in new exploration.   When wells are drilled deep, protected by intervening horizontal geological formations and encased properly, there seems to be little risk of contaminating ground water.  Environmental activists want no use of hydro carbon based fuel, and so oppose the process and the pipeline irrespective of their real or perceived risks.  But gas burns cleaner than coal.

A “keystone” is a carved stone at the apex of an arch, that most efficient and enduring architectural element.  The keystone secures the structure and balances the opposing forces of the arch.  Perhaps this is an appropriate metaphor for a solution.  Along with converting more electrical generation and vehicles to natural gas, using our own reserves and buying from Canada, delivering it via the Keystone Pipeline to our own refineries in Houston leads us down the road to energy independence.  The pipeline has been studied in depth for three years and no serious environmental risk has been identified.  Construction of the pipeline means 20,000 jobs almost immediately.

Oil and gas production in our country with the new technology has grown jobs in this industry from 200,000 to 440,000 since 2003.  $38 billion in Federal loans under the current administration has added only 3,500 green jobs, and much of the money was wasted in Solyndra scandals and billions more in tax credits as windfalls to wind farm developers, artificially lowering their costs. Let the market sort out the efficiencies we need to solve our multifaceted energy challenges and end our dependence on unstable nations with stated intentions to destroy us.

“If the wind will not serve, take to the oars.”