“The world is not like a platoon advancing at the pace of a single commander. It’s a network of events affecting each other.” “The Order of Time”, Carlos Rovelli, 2018

In 1972 we lived with our toddler Amy and our infant Gabriel in a winter rental on Mashnee Island at the north end of the Cape Cod Canal across from the Massachusetts Maritime Academy. We had very little money and an old flat head six-cylinder Chevy pickup truck painted with house paint that we bought in Boulder, Colorado when we lived there. Our next-door neighbor was Fred Cheever, who was in his sixties. John’s brother and Susan’s uncle, Fred befriended this young couple, told us of local must sees and gave us his copy of the New York Times Sunday paper after he finished with it. Fred ran the advertising department of a local radio station.

That year I worked for Newell B. Snow, a third-generation land surveyor in Buzzards Bay. Newell was in his early eighties and had original surveyor’s notebooks from his grandfather in the Civil War era. Old school and meticulous, he required a cane to get from place to place, but cognitively had lost nothing off the two-seam fastball. He remembered half-buried marble markers to help in laying out old boundary lines. Finding these markers and proving boundaries by cutting a line and researching the old books could mean the difference between a land locked piece of property and one that was accessible and much more valuable to the owners. Detective work was the fun part; sometimes I would be allowed on a rainy day to help do the math to close the traverses, which had to be proofed within a narrow percentage. If one didn’t tie out, it meant going back into the woods to remeasure until the trigonometry of angles and measurements closed back to the starting point of the lot.

Newell’s son-in-law, Charlie was the crew chief, and Bob, a retired Coast Guard Chief Petty Officer in his late forties was second man on the crew. I was the third man, held the dumb end of the hundred-foot metal tape and cut brush and trees out of the line. Newell eschewed the use of noisy and expensive chainsaws, which regrettably for me, was one of the few things I was good at when I first started my year as a land surveyor. The century old design brush hooks cut the lines so that we could shoot and measure them with the manual transits. I soon learned how to keep brush hooks sharp and use their keen ability against tough, stringy vines and scrub shrubs. When working exposed to the onshore winds in January, maintaining core body heat was an ongoing struggle. Bob gave me a woolen Navy watch cap, a kind gift that helped. Twenty below in the Maine woods was not as numbing as North Atlantic wind that cored through and was impossible to ignore. The hard work of a brush hook helped to keep me warm.

Eventually I convinced Newell to buy a small Stihl chainsaw, and while it was less effective against vines and thick underbrush, it significantly improved the crew’s efficiency on the numerous scrub white oaks and red pines that blocked the sight lines of the transit.  The Stihl immediately increased our daily production. Instead of detouring around larger trees with four short ninety-degree shoots and measurements as had been done for prior centuries, I’d quickly drop the old scrub oaks or red pines into the adjacent woods and leave them. I regretted my recommendation and its ramifications. A twelve-inch diameter tree that may have been forty years old was too daunting to attack with a brush hook, but a chainsaw put it down in five or ten minutes. 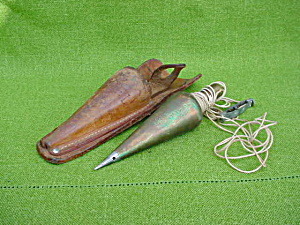 Long cut lines through bramble-clogged Cape Cod woods made up two legs of what we called “spaghetti lots”: an elongated rectangle with two hundred feet of road frontage and a half a mile or so into the trees and vines on each side. A lot of hills, measuring, shooting the lines and cutting.  The other surveyor’s skill that is mostly lost with encroaching technology is the plumb bob. Charlie would spot a wooden stake that we cut out of two by three studs sharpened with a hatchet on rain out days. I’d drive it into the exact location defined by the transit with a five-pound short handled sledge hammer, then nail a small tack into it as a temporary line marker for measurements. We used a metal hundred-foot tape stretched to an exact tension with a spring-loaded scale to make certain as exact a measurement as we could manage. Plumb bobs on both ends of the measurement with the other end of its string held against our tape suspended exactly over our tacks.

On inclines the tape had to be held level as well as with the proper tension. On steep hills, we could manage much less than hundred-foot measurements. Sometimes as little as a horizontal ten foot pull and we would need to place a new stake. The high end of the tape would be held precisely on the tack, the low end held high and level with straining arms and a nearly fully extended plumb bob string, the point of the plumb bob without a quiver held over the tack. The bob could not touch the nail because both the plumb and the exact dimension would be lost. On a half mile traverse, any accumulated small errors of inexactly taken measurements would ruin the closing back in the office.

Now, of course, all this is gone, along with four transit leveling screw gauges, meticulously adjusted by the crew chief at every set up. Electronic self-leveling laser transits and corresponding electronic target poles not only accomplish the exact measurements, the rectangular (or any other angled) multi sided traverses are closed and calculated as the surveying teams go along within the programming and screens of the transits. Plumb bobs, wooden stakes and tacks are forgotten accoutrements.

As I think about plumb bobs, straining arms held high to mark their precise locations to establish reliable borderlines, I ponder the lost plumb bobs of our bewildered culture, the objective moral norms held true and plumb for centuries, pointing by gravity towards the center of the earth, exactly defining with rigor and wisdom the boundaries we seem to want blurred. And I wonder about how human nature, unchanged, mocks both the convolutions and the ubiquitous noise of our technology, and marks as silly our fatuous, doomed attempts at materialistic perfectibility.

“Thus, He showed me, and behold, the Lord was standing by a vertical wall with a plumb line in his hand. The Lord said to me, ‘What do you see, Amos?’ And I said, ‘A plumb line.” Then the Lord said, “Behold I am about to put a plumb line in the midst of My people….”  Amos 7: 7-8a

One response to “Brush Hooks and Plumb Bobs”