Turtles All The Way Down

From this Quora question: In a Joe Rogan podcast, mathematician Eric Weinstein stated that the basis of all math is founded upon a few assumptions that cannot be proven. Can someone explain this to me?   One good answer from a frequent Quora poster, Andy Lund: [i]

…… Now suppose you have the number 1 and I give you another number 1, what number do you have? There is no number 1 in the physical universe. There is 1 goldfish, there is 1 oak tree, there is 1 cloud, but there is not just a plain number 1. You cannot just collect some numbers and count how many you have the way you can collect baseball cards. But we know 1+1=2. How do you prove it?

The Greek mathematician Euclid said that any two points can be connected by a line segment. How do you prove such a statement? There are no points in the universe, and no line segments either, only things that approximate points and segments. In fact, Euclid did not even tell us what a point of a line segment is, he just assumes we know what he is talking about. This kind of statement is called an axiom. It is just something that is assumed to be true because it makes sense. It is so basic that there is nothing from which it can be proven……

These assumptions are so basic that they cannot be proven, yet they are the basis for all Euclidean geometry (stuff you can draw on an infinitely large piece of paper). Try it yourself, try to prove any one of Euclid’s axioms. You cannot even show that a circle exists, it doesn’t in any real sense as everything in the real world breaks down at microscopic or subatomic levels. So how can you prove something so basic as any of Euclid’s axioms?

Math is like a tower; each new level is built on the ones below. At the bottom of the tower is the foundation, but what is that built on? It is nothing more than assumptions. Math ain’t turtles all the way down. [ii]  Quora 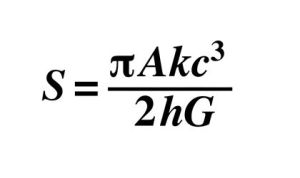 Math is the basis for most of modern science from physics to chemistry to the sophisticated statistical analysis of economics, sociology and even psychology. The foundation of the technological marvels of computer science, GPS navigation, the internet, CGI movies, everything that has so emphatically and irreversibly transformed our daily lives, is some complex mathematics.

Once we get past arithmetic, trigonometry, algebra, and basic geometry, maybe a smattering of calculus, the set of people that understands or can explain the math gets a little thin. There may be a few folks (I am not one of them) reading this who can explain and understand the depths of quantum physics or the seemingly simple “Hawking’s equation” that Stephen Hawking derived and put on his tombstone. Hawking’s most important discovery, it calculates entropy or the amount of disorder in a black hole system and changes everything apparently in understanding how the universe changes over time. Who knew? I know what pi means, that’s worth something, right?

All of it below where the turtles live is axiomatic – assumptions — are givens that we understand or intuit as true. Yet we moderns trust these turtles and more and more base our lives on what has been contrived from them. Nothing wrong with that, I suppose. Just writing this post relies on a laptop that relies on some math quite a few turtles down. And yet have we left something behind in our blind trust that technology and science alone will lead us eventually to the promised land of human perfection? Does this complex tapestry of science, as beautiful and elegant as it may be, contain all the truth we need?  That we will need?

“(T)he good news is that you can rearrange any subject to learn most of it very, very quickly. The bad news is that it will feel terrible because you will be told that you are doing the wrong thing and dooming yourself to a life of mediocrity as a jack of many trades, master of none – but in fact, the problem is that the jack of one trade is the connector of none.”  Eric R. Weinstein

In his essay, “Why Do Men Stupefy Themselves?” Leo Tolstoy writes of the slow, incremental process by which the character Raskolnikov in Fyodor Dostoevsky’s “Crime and Punishment” decided to kill the old woman. “That question was decided….  When he was doing nothing and was only thinking, when only his consciousness was active: and in that consciousness tiny, tiny alterations were taking place…. Tiny, tiny alterations—-but on them depend the most immense and terrible consequences…and boundless results of unimaginable importance may follow from the most minute alterations occurring in the domain of consciousness.” [iii]

After a few centuries of deeply embedded ideas compiled from Nietzsche, Freud, Marx, Hume, and many others, the tiny, tiny alterations accruing in the minds of all of us have changed us. The water in our goldfish bowl has come to be understood as all there is.  What was not that long ago discussed solely in late night sessions in the upper reaches of academia and in sophomore dorm rooms has trickled down to the commonplace axioms of post-modern humanity. We do not acknowledge that a constriction of mind has taken place, but we now operate with the unspoken assumption that only the material world we can see, touch, observe with sophisticated instruments and describe with the language of science matters in any real sense. Is the scientific method the sole crucible in which we can grind away until all is made clear?

Let us imagine that the beauty of metaphor, poetry, art, philosophy, and yes, even theology, also may contain another, a greater, more edifying, and elevated deeper truth. Let us imagine that to acquiesce in our gradually learned self-imprisonment, we have disdained the marvels to be discovered in other disciplines of our mind. In restricting our vision to only that of the science department, let me suggest that our lifelong education has become too purse-mouthed, pinched, squint eyed, and parsimonious – a stingy worldview that constricts and restricts our understanding.

“For a transitory enchanted moment man must have held his breath in the presence of this continent, compelled into an aesthetic contemplation he neither understood nor desired, face to face for the last time in history with something commensurate to his capacity for wonder.” F. Scott Fitzgerald, The Great Gatsby

Fitzgerald was writing of the first Dutch explorers who landed on Manhattan Island, but in his most quoted passage, he was calling all of us to much more than an historical reflection. He was calling us to contemplate our “capacity for wonder.” In this most perplexing winter of 2020/2021, such reflection would be very fruitful for any of us: an ‘aesthetic contemplation’ and a conversation most needed.

We correctly take advantage every day of the giant construct that math and science has raised above the foundation of axioms and self-evident assumptions, but other axioms and their attendant beliefs have been left behind. If we are honest in our ‘aesthetic contemplation,’ other self-evident axioms answer other deeper questions most of us fear to ask because the answers will change our lives and change us.

What is the basis for the intelligibility of the universe that undergirds every aspect of science and math and the insatiable human need to know and understand? Why is the universe intelligible and possessed of an order that allows investigation and not a hot chaotic mess or a void? Why is there something rather than nothing? Below all the turtles where regress finds its base, does there exist an Axiom, an Intelligence and Will beyond our tiny imaginings? An “Ipsum esse subsistens?[iv]”

What is basis for beauty and its resonance in the human spirit? All the way down below harmony, color, tone, balance, and perspective, does there exist Beauty itself that can be known?

Intelligibility and Beauty ain’t turtles all the way down.

And we know it.

“As to that which I am ignorant of concerning myself, I remain ignorant of it until my darkness shall be made as the noonday in Your sight.” The Confessions of St. Augustine

[ii] “Turtles all the way down” is an expression of the problem of infinite regress. The saying alludes to the mythological idea of a World Turtle that supports the flat earth on its back. It suggests that this turtle rests on the back of an even larger turtle, which itself is part of a column of increasingly large world turtles that continues indefinitely (i.e., “turtles all the way down”) .https://en.wikipedia.org/wiki/Turtles_all_the_way_down

[iii] Thanks to the piece “Tolstoy’s Prosaic Wisdom” by Gary Saul Morson in the Winter Edition 2020 of “Evangelization & Culture, The Journal of the Word on Fire Institute.”

[iv] Ipsum Esse Subsistens is a phrase popularized by Thomas Aquinas, that means the subsistent act of to-be itself. https://ipsumessesubsistens.com/

3 responses to “Turtles All The Way Down”