The Problem with Socialism 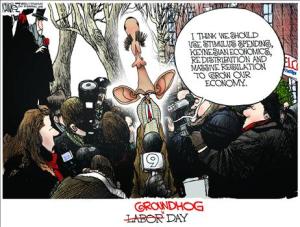 An article by Kevin Williamson earlier this month in National Review points out the fallacy of thinking Barack Obama a socialist because of his enthrallment with “spreading the wealth”.  Advocacy for large government deficit spending and tax policies tilted towards income redistribution are definitive of all modern liberalism and “progressive” politics, but they don’t make anyone a socialist.  The nucleus of socialism is central planning.  The Obama characteristic that firmly plants him in the socialist camp is his fixation with centrally planned solutions for the nation’s ills, irrespective of their consistent record of disappointment.

Few differences exist between the old five year plans of the Soviet Union for potato or wheat harvests and the “planned” objectives of 50% renewable energy or tax credits to increase purchases of electric cars or health care mandates. What will achieve real progress are competitive and practicable means of renewable energy sources, producing electric cars that anyone actually wants to drive at reasonable prices and facing squarely the many conundrums of modern health care.  Not arbitrary policies implemented by a cumbersome bureaucracy.

The European Union economies of Greece, Spain, Italy and even France are foundering not just because they spend more than they generate in wealth for entitlements, early retirements and “social justice” programs (although that is what is happening), but the root cause of failure is central planning itself.  Collapse occurs not because there aren’t plenty of brilliant true believers doing the planning, but because the premise of central planning is deeply flawed and unworkable.

This weekend’s Wall Street Journal carries an instructive editorial by Alberto Mingardi, the director general of the Intsituto Bruno Leoni, a Milan free market think tank. Link to editorial here.  In it, Mr. Mingardi cites Frederich A. Hayek’s Nobel Prize winning economic writings debunking the central planning myth.  Dr. Hayek is the author of the celebrated “Road to Serfdom”.  Central planning may have been feasible when humankind lived in small, insular groups which shared common values and metrics for measuring relative worth and achievement.  In modern, multifaceted states, there are too much data, too many variables, too many unknowns and too many destabilizing influences. Computer models are not capable of predicting the behavior of or the outcomes for small groups and individuals within this complexity.  Grandiose plans and goals predicated on these models are built on shifting sands.

The inherent waste and inefficiencies in outsized bureaucracy multiplies cost and diminishes the competence of any enterprise.  Corruption, internal wrangling and cronyism exacerbate the ineffectivness of solutions that do not solve and analgesics that do not relieve.  Our path out of the swamp cannot be found in unsound theories.  Socialism reads a lot better than it lives.

Socialism in general has a record of failure so blatant that only an intellectual could ignore or evade it.

Filed under Politics and government

2 responses to “The Problem with Socialism”