We lived in rural central Maine for just shy of a decade from the early seventies to the early eighties.  Idealistic, back to the land, modified hippies with jobs. Mount Vernon was in the lakes country about a half an hour north and west of Augusta, the state capital.  The town’s population was an eclectic mix:  fourth or fifth generation Maine Yankees; professionals with lots of letters after their names who taught in local universities, practiced law or medicine or worked for the state government; and a colorful subculture of neophyte farmers, sculptures, writers, painters and other artists who lived in hope, including the “poet laureate” of Maine, John Stevens, an eccentric given to public poetry recitations whether scheduled or uninvited at any gathering.  Many of us were amateur musicians, had large gardens, raised livestock, canned our food, heated with wood and lived in old houses or converted barns. Many, also, were looking for an escape, new connections, new meaning, which we, after a long, hard journey found, just not where we had expected it. 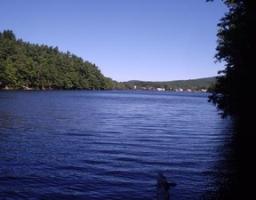 Twelve lakes graced this pretty land of rolling hills, farms and forest.  The summer months, both of them, blew the town’s population up from 600 to over 2,000.  Our first house was an ill advised, but romantic, small converted post and beam barn off the Vienna Road (pronounced Vy-anna) with two wood burning stoves: a sky blue porcelain Glenwood cook stove and an antique, side loading, cast iron parlor stove with a lovely 5” porcelain medallion with an enigmatic woman’s face.  We had three large rooms, one of which we used for our two young children’s bedroom, a living room and a dining room in addition to a small back room, used as an office.  A tiny galley kitchen on the south end of the house led directly into an even tinier bathroom with a shower and toilet.

Adult sleeping accommodations were a choice of two open  lofts that we accessed with a rough pole ladder.  Each loft had a floor of painted pine planks supported by cedar poles with the bark still on them across the full width of the room. In the winter we used the one over half of the living room, the rest being open cathedral ceilings.  Summers, we moved the mattress into the dining room loft, which had a window and good ventilation.  Set back from the road a hundred feet, the driveway ended in a ‘door yard’ at the foot of a small hill, which we would climb over and down to enter the front door.  The north end of the living room faced out to a stone wall and a field with the beginnings of the western mountains beyond. In a bad winter, snow would drift halfway up the north and east windows.

On the back end of our five acre wooded lot, about thirty feet in elevation higher than the house, we had a spring house.  The pipe ran 400’ down the slope dug deep about three feet to the ledge.  Even when the electricity and the pump went out, there was sufficient gravity pressure to supply a good flow.  We moved in towards the end of the winter, and the house hadn’t been occupied for a month. Unused, the pipe froze solid going up to the springhouse, and we hand carried water two buckets at a time for the first two months in residence until the frost went out.  After a couple of tumbles on the hill, the spilled water turned the path to a steep icy slide. Baths were in a galvanized tin tub set for warmth next to the cook stove, which heated up large pans of water.  With two small children, I designated my wife, Saint Rita.

The native Mainers were friendly, but reticent with a wait and see attitude towards newcomers until they saw you could learn to bear the winter, which hit twenty below, and stick it out.  I was a lumber salesman traveling the state, so the jury was definitely out.  Our first spring, looking for extra income, I advertised by word of mouth that I was a licensed arborist.  Phil and Mimi Judd lived in a gracious large colonial with an open front yard directly across the main street from Lew’s Country Store, which was on the shore of Lake Minnehonk next to the post office.  In the Mount Vernon universe, Lew’s was the center.  Nestled close to the front right of the Judd house was a ninety foot American Elm stricken with Dutch Elm Disease and doomed.

On a warm early June Saturday, I tackled the elm, hiring the help of local character, “Tunney” Leighton, who had a backhoe.  He ran the ground ropes while we lowered on a one inch rope from the house side of the tree several large leaders that extended out over the center chimney and the roof.  I was tied in near the top with another line.  After we had sufficient weight off the back side, and would clear the chimney, to be safe we ran the 1” “bull” line from three quarters up the tree through a block pulley secured in a white spruce set in the front corner of the yard. Tunney put a steady pull on it with the backhoe.  The base of the tree was about 42 inches in diameter; I cut a notch in the front of the tree, checked the fall area and started the back cut to drop the elm into the front yard.  By this time, half the town was in attendance.  I knew if I buried the tree into the attic, I had done my last tree work in Mount Vernon.   The tree broke correctly and accelerated to a booming crash with pieces of dead elm scattering into the street.

A couple of weeks later, Everett Williams drove into my door yard in his pick up truck.  Everett was the “rudd cummissiona” (road commissioner) and chairman of the town selectmen. He and his wife, Hope, were fourth generation Mount Vernon residents.   I was on my white cedar shingle roof with my trusty chainsaw installing a new Sear’s triple insulated metal chimney for the cook stove.  Any Mainer will tell you to cut the stove pipe out a side wall and corbel the metal chimney up an outside wall, not through the roof, but I was following the certified Sears directions.  Everett watched me silently, probably to his amusement.

I shut off the saw when I saw him and greeted him.  He yelled up, “Does your roof leak?”   I replied back a little indignantly, “No, it doesn’t leak!”  Everett finished his end of the conversation with, “If I had a roof that didn’t leak, I wouldn’t cut a hole in it.”  It was classic Maine Yankee, and I found out as I got to know him, meant kindly.  Of course, he was right, and we always had ice dams and dribbles in around the chimney as long as we lived there.  His visit meant that after the elm tree, the long time residents decided there was more to us than flat lander, temporary dreamy interlopers, and the path to full acceptance was open.