We are pet-less, now, if you don’t count grandchildren, but in the past a small menagerie of somewhat domesticated fauna has graced our path.  Mostly cats and dogs, but occasional hamsters, rabbits, laying hens and completely useless goldfish have come and gone.  By gone, with the goldfish, I am referring to their final resting place, which usually requires just one flush.  Cats and dogs are more complicated.

“Cats don’t like change without their consent.”  Roger Caras

First there were Sam and Harry, who had to be jettisoned to other family members when we moved.  Another half dozen or more cats have drifted in and out of our lives, the last being my favorite, Mama Cat, who died in the bushes out back (as cats are wont to do) after just over twenty years with us.  She used to sleep on top of Meg’s head when she lived here.  Meg attributes that resting spot to affection; I would tease her that Mama Cat liked to be warm, and the crown of her head was an efficient source of heat.  Since our cats were always outside as well as inside cats, every once in a while, Meg, especially, would wake up with flea bites – the price of feline fondness.

Typical for their species, our cats were languid, detached and generally disinterested in pleasing humans —  as happy on a sunny window sill as curled on someone’s lap.   On their whim (not yours) they would purr, rub up against a leg or jump on the table for attention.  Most of the time, however, they were content to pursue their own interests, actually more than content.  Obsessed is more like it.  Several were superlative hunters and would leave gifts of mouse parts or half birds on our front steps.  Big Billy (he of the big body and small brain) was fixated on killing telephone cords.  He also would wage fierce battle for five minutes at a time with his doppelganger up on his hind legs in the floor to ceiling mirror in front of the girl’s ballet exercise bar. He was indifferent to the ridicule of humans.  Billy’s greatest triumph came when the neighbor’s scruffy mongrel chased him under the yews out front; after a terrible yelp, the mutt emerged with a badly bloodied nose and cured of cat chasing.

“If a dog jumps into your lap, it is because he is fond of you; but if a cat does the same thing, it is because your lap is warmer.”  Alfred North Whitehead 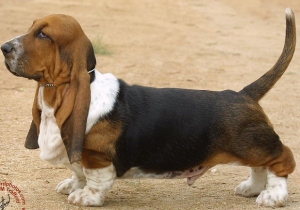 Dogs are a different tale.  Their pleasure was in pleasing and their passion in protective loyalty – except for Frankie, our basset hound, who danced to a different drummer.  A friend found Frankie at around three months old half starved in the foothills outside of Boulder.  Dave and Yvonne had an enormous Weimaraner and a small apartment; a second pooch was not an option, so we were gifted with him.  He was beautiful in a way only funny looking dogs can be.  He had two speeds: absolute rest approaching coma and full throttle.

Back in Massachusetts, I worked awhile as a reporter in the evening covering local boards and politics.  During the day, I would sometimes take Frankie for a run in the nearby forest because beyond all else (except supper meat stolen from our table) he liked to hunt on a scent.  I would wait until he went off after a rabbit or squirrel, then I’d run and hide while he was distracted.  If observed by a rational person, my sanity would have been questioned.  Splashing up streams to lose him, sometimes I would climb a tall, straight tree and jump to another and yet another, so my descent would not land me in the spot from which I ascended.  Eventually Frankie would tire of rabbit and come looking for me. My predilection was to hide in a bush near a clearing where I could observe him.  When he ran out of trail at the base of one tree, he would expand his search in a widening spiral until he again picked up my scent.   As he neared my hiding spot, I would break from the bushes in a dead sprint; Frankie would lift his voice in a full throated howl and run me down.  We’d laugh (or so I imagined he was laughing, too) and wrestle, rolling in the pine needles.

“The great pleasure of a dog is that you may make a fool of yourself with him and not only will he not scold you, but he will make a fool of himself too.”  Samuel Butler

Our second favorite dog was a German Shepherd/Siberian Husky mix, a gift from a couple we knew on Cape Cod, when we lived on Mashnee Island.  Nikki resembled a wolf and was always an outdoor dog, even in the harshest of Maine winters.  She would pace and pant in our house until we put her outside on her long run.  I built for her an insulated lean-to shelter against the lee side of our woodshed, but she preferred to sleep in the snow.  She too had strong hunting instincts and loved to run in the woods. I frequently would go for a two mile run with her loping easily alongside.  In the winter she would tear across the large field adjacent to our house kicking up a ten foot high wake of loose powdered snow.  We were working to expand the woodshed one fall afternoon, when Nikki spotted a large wood rat.  She trapped it under a loose 12” rough board that was lying haphazardly over a small hole.  Bounding back and forth from side to side of the board as the rat attempted one escape after another, she was a picture of silent, deadly focus.  Finally in seeming desperation, the rat fled towards the woods and got five feet before Nikki broke its spine with one clamp of her jaws and a quick backward snap.  Talking her out of her supper was a challenge.

Once after she broke off her run, which was 70’ long and constructed of heavy wire and a chain leash, I called for her at least an hour before she returned with bloody muzzle.  I was afraid she had been hit by a car at first, but found her uninjured.  A few minutes later, my neighbor down on the Vienna Road (pronounced “Vy-anna Rud”), “Juny” Hall (short for Junior) knocked on my door to let me know that he was one sheep short, and I owed him some money.  As gentle as she was with our children, prey was entirely of another order.

“We’ve begun to long for the pitter-patter of little feet – so we bought a dog.  Well, it’s cheaper, and you get more feet.”  Rita Rudner

I sometimes think of the current societal oddness about animals.  P.D. James, the British author of the well known Adam Dalgliesh poet/detective mysteries, wrote in 1992 a dystopia novel about a future culture dying with terminal infertility.  Couples without the ability to have children resorted to dressing up and pushing cats and small dogs around in prams.   As I meet the many young couples in our neighborhood taking their twice daily constitutionals, baggies in hand, I listen to them fawn over their pet’s eccentricities as most once spoke about their children.  When they tell me about spending thousands of dollars on cancer surgeries for twelve year old dogs, my obviously unenlightened sensibilities drive my thoughts unbidden to images of homeless families eating at local church food kitchens for which the money spent on terminally ill pets would be of great benefit.  It seems to this observer that something is out of balance.  I am fond of animals and would never be unkind towards them, but they are not people.

A fellow at work told me the story of his Aunt Barbara in Louisiana and spending summers on her farm.  She had several domestic cats and fed quite a large clowder (or glaring) of feral cats along with her farm animals.  Barbara also had three collies that she would let out at night.  A few times a month one of the feral cats would fail to survive an encounter with a collie.  When asked by her nephew why she allowed, even sanctioned, this harvesting, she explained in a matter of fact way that is reminiscent of the common sense practicality of good Maine rural folks.  It seems she kept the cats around to control the population of rats in her barns; the collies were allowed to roam to control the population of feral cats.  To me this is  symmetry and good logic, displaying a proper relationship of human and animal symbiosis.  Not politically correct in today’s wealthy specialty veterinarian culture with health insurance for pets, but to me, this necessary balance reflects more humanity than kittens and puppies dressed up in doll’s clothes riding in baby carriages.