The perfect strawberry is a complicated business, and one in which I am not particularly adept. To understand this year’s crop requires a history.

Twenty years ago in Providence, an 80’ Norway spruce in our back yard made the transition from playground and shade provider to weed.  Conifers have been around this tired planet for 200 million years, a vital component of many ecosystems.  Their names are strong, evocative – even poetic:  Sitka Spruce, Pacific Silver Fir, Lodgepole Pine, Incense Cedar, Mountain Hemlock, Baldcypress, Redwood, and Tamarack.   Evergreen is a misnomer.  Each species has its own timetable, but they shed their needles every year like deciduous trees, some with a striking fall yellow.  Their narrow pointed leaves carpet the earth, but they only drop older needles with the current crop (or several year’s worth) remaining to hold ever-green all winter.

In the early nineties, this illustrious past made no difference to me: the needles and shade killed what little lawn I had in my tiny city lot; the sticky, 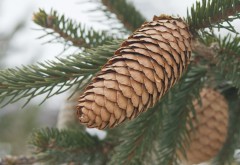 golden drippings from the bark bonded to the finish of our cars; cones devastated our bare feet, and the 18” limbs hung like the Sword of Damocles over my garage, only five feet from its thirty six inch trunk.  We had no hope of a garden, and the pin oak I treasured twenty feet north of the spruce was beginning to deform to find sun of its own. The Norway spruce which had been planted by the previous owner of our home in the 1930’s was sixty years later a tall and heavy weed.

After we moved to Providence, my son designed and built a refuge with his new city friends.  Scavenging from the dumpsters in a six lot subdivision a quarter mile away, they cut and fit remnants of two by fours, two by sixes, half inch plywood and discarded loose nails into a tree house fifteen feet up in the Norway spruce.  My only contributions were a blue tarp to waterproof the roof and, after setting a rope in place, teaching Gabriel how to foot lock up the rope to his sanctuary.  I did go up to reassure his mother that although not OSHA compliant, it was habitable and secure.

The three wings, each long enough to accommodate a sleeping bag conjoined into a four foot square parlor under a three and a half foot ceiling.  Once they hoisted themselves up and pulled the rope up after them, parents slept secure that no marauders could easily access their fortress.  The boys ran an extension cord from Gabe’s window for a light, and when they each stretched out on their bags facing inward, the center afforded ample space for card playing, scarfing down Twinkies, Cokes and Doritos (fare foreign to his mother’s kitchen), tale telling and planning night excursions into the city.  We naively thought they were safe from the city; years later we learned the city wasn’t safe from them.

Unbeknownst to their parents, two in the morning expeditions wandered as far as the bus tunnel steeply descending the half mile from Brown University Hill to South Main Street near the courthouse three miles from our house.  The tunnel was a traffic free route for public transportation connecting the university communities of Rhode Island School of Design and Brown to downtown.  Pitch dark, except when a bus caromed through lights ablaze, the tunnel was an irresistible challenge for pre teen skateboarders.  Even in the nanny state days of ubiquitous helmets, boys will find ways of courting danger to grow into men.  They all survived – no fractures or paralysis.

The boys grew to manhood, and the young man helped his father dismantle the abandoned refuge and cut down its pedestal, now a weed.  With chainsaw, climbing saddle and ropes, we worked for two days first lowering the large limbs over the garage from the bottom up, and then popping the top twenty five feet into the small target circumscribed by the back fence, the pin oak, the garage and our house.  After all the limbs and top were safely cut up on the ground, three more ten foot logs were dropped one at a time from the remaining pole.  Last was the twenty five foot trunk, which we notched and felled onto the mark.

With the spruce gone, several years went by before we dug in a twelve by twenty foot raised planting bed in the sunny spot salvaged from the spruce’s shade.  Hundreds of pounds of organic compost built up top soil, and lime sweetened sixty years of acidic spruce needles.  First there were flowers, a lilac and a butterfly bush.  Later we reverted to our Maine habit of vegetable and herb garden.  In the tiny plot, we plant tomatoes, lettuce, zucchini and an occasional ill advised venture into peppers or pole beans.

Two years ago, we put in some strawberry plants, which quickly expired for horticultural reasons unfathomable to amateurs.  Last year I tried again, and they took.  The few miserable fruit that exposed themselves were quickly consumed by birds just as they matured.  Undeterred, this winter I protected them with boards as we stored our firewood in the garden.  Unsure what I would find this spring, I was pleased to find they had prospered under the tarps and four cords of oak and maple.

Spring arrived; I weeded and raked in yet another few hundred pounds of dried manure and planted this year’s crop of vegetables.  The four strawberry plants looked so promising I planned to buy some bird netting to defend the harvest from predators, but waited until the weekend, which as it turned out, was three days too late.

Last week, while watering the garden at five AM as is my habit, I glimpsed half buried red under one of the strawberry plants.  With faint hope and mounting joy, I gently uncovered just ripened perfection.  I briefly considered saving it for Rita, but she was asleep after all.  I washed off the soil, admired God’s wondrous variety for a few moments and bit into sweet delight after a bitter winter.

“It is better to limp along the way than stride along off the way.  For a man who limps along the way, even if he only makes slow progress, comes to the end of the way, but one who is off the way, the more quickly he runs, the further away he is from his goal.”  Thomas Aquinas

5 responses to “The Perfect Strawberry”