Visiting my mother Thursday night, my allergic reaction to her three cats remains vigorous, but manageable.  Mom is a lively 93 and entirely unlikely to give up her Cookie, Scout and Checkers companions, so any reaction my eyes and sinuses have to her beloveds is entirely irrelevant – small price tag, really, for still having an engaged, funny, cheerful with infirmity and engaging mother.

When our children were young we had a rotating menagerie of cats, dogs, a tragedy of hamsters, a turtle and short lived dalliances with goldfish.  I don’t remember any allergies to any of them, but our dogs and cats were mostly outdoor pets who boarded with us most nights except for Nikki the husky mix who preferred sleeping in the snow.

Occasionally one of the more stupid (always male) cats would dash into the street on a mission and be run over by a car.  We always opted for affording them the short, happy life of climbing, sleeping in the sun, courting (although all were “fixed”), defending their territory and hunting indigenous small fauna – four footed or winged.  As anyone familiar with the dead eye gaze of a cat will confirm, its primitive, tiny brain consists of an ineradicable instinct to survey the field and regard anything less than six inches in height as prey.  I remember an uncomfortable feeling when our cat would stare intently at me probably wondering how different their lives would be if I was the size of an adolescent squirrel.

My mother’s cats are entirely housebound and spoiled fat: friendly for the most part, but with normal feline reserve, comfortable with complete freedom to occupy any space their whimsies fancy.  Allergens abound; they frequently dine on the breakfast bar peninsula, which is an accommodation up with which my nurse wife would never put.  Rita has an aversion for some reason to eating where little feet fresh from the litter box have recently trod.

“You can visualize a hundred cats. Beyond that, you can’t. Two hundred, five hundred, it all looks the same.”  Jack Wright, Ontario housepainter and joint record holder.

We are grateful that our mother’s crazy cat lady proclivity is relatively constrained.  The Guinness Book record was set by Jack and Donna Wright.[i]  The collection started with Midnight, Donna’s black long hair, which had a wild night, then a litter that the Wrights were unwilling to break up.  Next came a few strays; their house gained local celebrity as Cat Crossing.  The count ballooned as anyone with an extra cat or a found cat started dropping them off.  After an appearance on the Phil Donahue show about their record 145 cats in one house, contributions went national and got a bit out of hand.  As Cat Crossing’s reputation grew, cats were couriered or shipped in from afar. 689 housecats was their top count.  The Wrights didn’t have it in them to deny any feline some sustenance.  Costs eventually ran to $111,000 a year, which included individually wrapped Christmas toys.  Each and every one had a name. 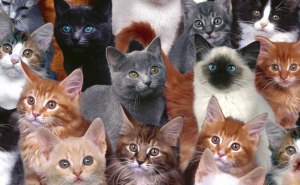 Cat hoarding has a curious relationship with Toxoplasma gondii, a one-celled protozoan parasite which normally reproduces asexually.  Toxo can enhance its gene pool by reproducing sexually, but that can only occur within a cat’s intestines.  If the parasite invades another host through ingestion or just skin contact with cat feces, then humans, monkeys, Beluga whales, bats, elephants, chickens and many other species become unwilling habitat. Once in, it swims through the blood stream directly to the brain.   One third of the world’s human population has Toxo organism in their system.  After the parasite takes up residence, it forms tiny cysts, especially in the amygdala, the center of both pleasure and anxiety in the mammalian brain.  The violated amygdala produces excess dopamine, a potent and manipulative neurotransmitter. These cysts can slow reaction time, induce aggressive or jealous behavior in people and change the human sense of smell, rendering some humans immune to the pungent odor of cat urine.  All the better for cat collectors.

Even more peculiar is the tested effect of Toxo on rodents.  Lab rats hosting Toxo become obsessed with cat urine; they love cat urine; they crave cat urine; they seek out cat urine.  When exposed to it, their pleasure center resonates with the males reacting physiologically as they do around females in heat. Their little rat testicles swell.  Some aspects of cat hoarding are best left unexplored.

A cat once figured in an important lesson for me many years ago, fixated as I was on escalating complicated solutions and missing the simple one.  We lived in our old farm house in Farmington, Maine; a section of the dirt floor basement was a crawl space.  I kept finding the basement window sash on the ground and the cat in the basement.  A cat prowling in a dirt floor basement quickly leads to a reeking dirt floor basement, so I had asked everyone to make sure she didn’t go down there.  Too often, I opened the cellar door, and a cat would emerge.  I thought we had a very smart cat which could open the window to get into forbidden territory.   Having no time one such morning, I just jammed a shovel up against the sash into the dirt floor and left for the day’s business.  A week later, I discovered the shovel laid over, the sash open and the cat in the cellar. Damn cat, I thought:   smart and strong.  So I took my twenty two ounce framing hammer with two twelve penny nails and secured the sash, leaving the heads proud until I could come up with a permanent fix.  For a few days all was well, then the cat came up the stairs and the nails were pulled out.  The light finally shone on me, and I asked our son Gabe, who was about eight, what he knew.  He told me the crawl space was his favorite undiscoverable hiding spot when the neighborhood kids got together for a rousing game of Hide and Seek.  He said it had been hard to pull out the nails.  I laughed out loud at my stupidity when I told Rita the story.  I learned William of Ockham had taught us something worth knowing with his razor.[ii]

”When my cats aren’t happy, I’m not happy.  Not because I care about their moods but because I know they’re just sitting there thinking up ways to get even.”  Percy Bysshe Shelley

[i] The Violinist’s Thumb, Sam Kean,  Chapter 7, “The Machiavelli Microbe”

[ii] William of Ockham (1287-1347) wrote of “lex parsimoniae” a principle of succinctness to be used in problem solving wherein the hypothesis with the fewest assumptions and therefore the simplest solution is the correct one.