This is a Man’s World

Nothing without a woman or a girl.”

Now that we are thoroughly liberated and bone weary of it, some perspective may prove beneficial.   Betty Jean Newsome never received much recognition for the song; most remember only James Brown, although many covers were successful, notably Grand Funk Railroad, Van Morrison, Christine Aguilera, Celine Dion and the superb Etta James version in 2006. Women often were not acknowledged for their intellectual property contributions. With the exception of Marie Curie, name three women scientists.  Quick. 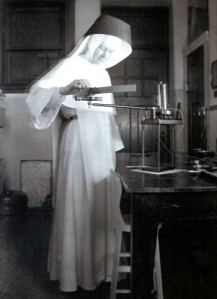 How many know of Sister Miriam Michael Stimson, a Dominican nun and scientist of the forties and fifties?  Yet her successful experiments to create a thin enough sample to observe DNA and the X ray chemistry work of Rosalind Franklin that illuminated the double helix were critical in the discovery of the ATCG form of DNA.  James Watson and Francis Crick likely would have had no Nobel Prize and worldwide fame without the seminal work of Sister Stimson and Franklin.  Some hold that Watson and Crick borrowed a bit too liberally without attribution to Sister Miriam and Franklin.  Watson and Crick parlayed their “discovery” to beat out other publicity eager academics like Linus Pauling for the science win of the century.  Crick would have had no bully pulpit for his later eccentricities and crusades against religion and for eugenics to genetically engineer a better sort of human being.  He thought it might be possible to program a computer to have a soul.  Perhaps Dr. Crick should have stuck to physics and borrowing ideas from chemists.  Perhaps he could have shared some of the recognition for his Nobel Prize as well.

“People have so many religious beliefs and until we have a more uniform view[ii] of ourselves, I think it would be risky to try and do anything in the way of eugenics.”   “Christianity may be OK between consenting adults in private but should not be taught to young children.” Francis Crick

Occasionally we venture out to the cutting edge of science and find lawyers.  Rita and I are possessed of a quirky sense of irony and find the class action lawsuits against Androgel, Fortesa and other pharmaceutical pitchmen for testosterone therapy a vein too rich to pass up.  In our headlong rush to remain forever young, men are easy prey to promises of better muscle definition, improved strength, inexhaustible energy and prodigious erections.  Unfortunately users of this snake oil also fall prey to more heart attacks, strokes and a 30% higher death rate than those who don’t rub on the magic gel.  Some say it’s a small price to pay for multiple orgasms, but others call in the attorneys.  The ads are current and frequent to attract more clients to reinforce the lawsuits, especially on sports shows.

What is more ironic is how fast these lawsuits proliferated and how slowly if at all, similar lawsuits have been filed for damages against big pharma for birth control pills.  Invented by men, pushed by men as “liberating” for women (and expedient for men with throbbing testosterone), birth control pills are listed as Group 1 carcinogens for breast cancer by the World Health Organization (see previous post, “Pink Orthodoxy”).  When convenient for men, the drugs get pushed and risks downplayed.  When somewhat inconvenient for men (strokes and heart attacks fall into the category of ‘inconvenient’), then loose the dogs of personal injury partnerships.

Remember how short lived male birth control pills were?  Never heard of them, did you?  Side effects included erectile dysfunction (known in the trade as limp under fire) and shrinkage (similar to skinny dipping in a Maine lake in April).  The side effects defeat the purpose. No lawsuits needed; much better for the women to shut up and take their medicine.

[i] Years after James Brown dropped Betty Jean as a girlfriend; she sued him for unpaid royalties declaring that she had written the entire song, not just the lyrics.

[ii] Saint Thomas More first used the term “Utopia” in his fictional book of political philosophy of the same name.  It is derived from the Greek: “eu” – “good”, ou, “not” and “topos” meaning “place”.  “no good place” or “no place land.”  When a eugenicist proposes to create a utopia with a “uniform view”, we can be assured that “view” is his own. Peel away a layer of a utopian eugenicist and the coercing fascist soon reveals himself.

Tagged as birth control, Etta James, Miriam Stimson, This is a man's world

One response to “This is a Man’s World”