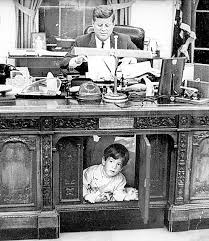 As it was for 9/11/01, all of us beyond early childhood in 1963 remember where we were and what we were doing when we heard that President John Fitzgerald Kennedy was shot dead in Dallas. For those in and around Boston, Massachusetts, the tragic announcement hit home hard and fast. Irish Catholics in neighborhoods like Jamaica Plain and West Roxbury kept Kennedy shrines with pictures and candles. I was a seventeen year old freshman eating lunch and playing Hearts with some new friends in the cafeteria on campus at Boston College, when a Jesuit dean came into the room and made the shocked announcement. Kennedy was not yet officially declared dead but was gravely wounded in Parkland Memorial Hospital. We bowed our heads while he prayed. Small groups with all the professor – student boundaries broken down gathered around radios and those few televisions that could be found.

Cardinal Cushing, a close friend of the Kennedy family, closed all the Catholic schools and universities in his diocese within the hour. We drove aimlessly listening to the car radio; the city was unearthly quiet, no one worked; mixed clusters of Bostonians crowded around appliance stores with TVs, in bars, and bunched near parked cars with windows down and radios on. Throughout the weekend our family retreated to home and sat stunned in front of the television watching hours of news about the murder of Dallas police officer, J.D. Tippit, the manhunt for Lee Harvey Oswald, his capture in the movie theater, the diorama of Jackie in her bloody dress standing next to Vice President Lyndon Johnson being sworn in as President on Air Force One with her husband’s coffin back in what had been their bedroom that morning.

We watched numbly as the line passed President Kennedy lying in state at the Capital through the night, the horse without a rider and the boots turned backwards, the many foreign rulers and dignitaries at the funeral, a grim President Johnson, the grief stricken, stoic Kennedy icons Bobby, Teddy, Jackie and the kids Caroline and John-John. John-John saluting his father’s flag draped casket. Old pictures repeated many times over the weekend of John-John peeking out from under his father’s desk in the Oval Office while his dad did the work of the most powerful man in the world. Pictures of Caroline riding her pony, Macaroni; Jackie and Jack happy, tanned in sunglasses and casual clothes on the back of a sailboat. Playing tag football with his brothers on the lawn in Hyannis. Camelot bled. My mother wept. 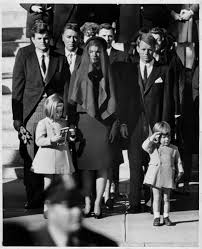 We lived for days with an exhausted and bereaved Walter Cronkite on CBS News in black and white. When we thought we could absorb no more, we were rendered gap-jawed yet again. As we strained for a look at the assassin being moved at the jail, we saw him gut shot by Jack Ruby on live television, the twenty four year old Oswald’s face distorted in shock and pain. We heard the beginnings of a cornucopia of conspiracy theories, no one wanting to believe that such a man could be taken down by a random act of seemingly deranged violence. Yet the lone wolf assassin with a mail order Italian rifle, shooting from the Texas School Book Depository narrative stuck – with the Warren Commission signing off.

No grassy knoll, no coconspirators, no Mafia, no Cubans, no Russians, no CIA or plotting LBJ, no John Birch Society, no Oliver Stone, no Jim Garrison. The horrific Zapruder home movie with the first shot through his throat and into Texas Governor John Connally, the seconds that seem like hours between shots when we still want to yell hopelessly, “Get down!” The second shot – blood, brains, final. Jackie in shock crawling in her pink dress and pillbox hat over the trunk of the fast moving limo trying to recover part of her husband’s skull blown away as the car accelerated to a way too late escape. That’s what we were left with.

With records sealed seemingly forever, it seemed my questions would not be answered in this lifetime, until on our trip last month to visit Bob and Cathy Cormack, Bob showed me a book I have not been able to put down. How I missed it seven years ago can only be ascribed to preoccupation.

“As I will demonstrate, everything suggests the Soviet Union recruitment of Oswald when he was assigned as a young Marine in Japan. In the available documents I also uncovered clear evidence that his mission upon his return to the United States was to assassinate President Kennedy, who had forced Khrushchev to erect the Berlin Wall in 1961 and hastily withdraw his nuclear missiles from Cuba in 1962. Never before had a Soviet leader been so egregiously humiliated.” From the preface of ”Programmed to Kill, Lee Harvey Oswald, the Soviet KGB, and the Kennedy Assassination – The Training of a Dedicated Agent,” Ion Mihai Pacepa, 2007

Ion Pacepa defected in 1978 from Romanian intelligence, a subsidiary of Soviet intelligence. He was the national security advisor to Romania’s president and acting chief of his foreign intelligence service; he supervised the Romanian equivalent of the American National Security Agency (NSA). Pacepa is the highest ranking Soviet bloc intelligence officer ever to defect to the U.S. In well annotated detail, he describes Lee Harvey Oswald as fitting perfectly the pattern of Soviet recruitment of disaffected American military personnel during the long, Cold War. Oswald’s arranged marriage to Marina, his reinsertion into the U.S., his relationships with known Soviet covert and overt agents all fit the mold of a ”serzhant,” as these agents were called.

Oswald first came to the attention of the PGU (Pervoye Glavnoye Upravleniye), the Soviet espionage service and First Chief Directorate of the KGB, when he was a radar operator in a clandestine base in Japan. When he defected to the USSR, he was treated as royalty, especially after data he supplied on the altitude patterns of the top secret American U2 spy plane led to the downing of one in May of 1960 and the capture of its pilot, Gary Powers. In 1961, he was persuaded by the PGU to train as a clandestine sleeper agent with his mission to assassinate the “Pig” and “son of the millionaire” as Soviet Premier Nikita Khrushchev often referred to the young president who had bested him.

“Programmed to Kill” is an well written study that reads like a spy novel about the inner workings of the KGB and the Soviet Union at its zenith. Khrushchev rescinded the assassination order after his brutality in previous assassinations and attempted assassinations was revealed. Murder was one of his main tools of state, but with the publicity, the Politburo was losing faith in him. The assassination of an American President at his hand could bring Khrushchev himself to a bullet into the back of his head in the basement of the Lubyanka. The PGU lost control of Oswald and feared in an effort to return to Russia a bigger hero, he would complete his original mission in Dallas on his own. All the related Soviet bloc intelligence services began immediately a massive, well run disinformation campaign to deflect attention away from the USSR, casting blame on the CIA, President Johnson and right wing Texas political elements. Dallas nightclub owner and police “hanger on” Jack Ruby, an illegal agent of Cuban intelligence services, was convinced to shoot Oswald to silence him. Ruby was in turn murdered using a well-developed KGB radioactive poison technique inducing a virulent, fast killing cancer.

Credible and chilling, the story holds together, and the book is well worth your time if you have interest in the Kennedys, the assassination, KGB spy craft and the history of a pivotal event in our history. The death of President Kennedy, and the subsequent murders of Robert Kennedy and Martin Luther King, helped to precipitate the cynicism leading to the tsunami of cultural transformation in my generation that resonates to this day.

“The Kennedy assassination was one of the extremely rare cold war episodes in which both sides were vitally interested in hiding the truth.” ”Programmed to Kill, Lee Harvey Oswald, the Soviet KGB, and the Kennedy Assassination – The Training of a Dedicated Agent,” Ion Mihai Pacepa, 2007