“I never learn anything talking. I only learn things when I ask questions.”  Lou Holtz 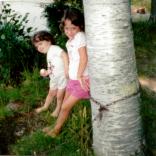 When our youngest daughter Meg was around four, we were walking around our old neighborhood in Providence. As we approached one house, we were accosted by a malodorous intrusion.  My first thoughts were ‘broken septic pipe’; my second was that all smells are particulate, which was not comforting. I realized that Meg was just trying to reconcile an unpleasant incident and her previous experiences with smells outdoors.  “Dad, is someone having a yucky cookout?” I read that the average four-year-old asks four hundred questions a day. I thought that was an exaggeration until we encountered Meg, a mischief always ready to throw something or run from a call home and always ready to ask a question, most of the time with five follow up questions. She outdid the most dogged of journalists.

Our third granddaughter Mary may outdo her Aunty Meg with questions. She gauges the temperature in the room, especially when she thinks she may have crossed a line. “Are you mad?” “Are you sad?” “Are you happy?”  A couple of months ago, she wanted to clear up an issue of compelling interest to her at the moment. When she was instructed to stop picking her nose (which is a remarkably cute one), she immediately asked, “Can I pick the other one?” She needed to know if the prohibition was nostril specific – not an unnecessary clarification for a three-year-old. Curiosity is what leads us first to knowledge, then to understanding, and then perhaps with “know thyself” good fortune, wisdom – that most necessary of gifts.

The wisest teach with questions, many times not providing all the answers themselves, but leading each inquiring mind to seek the truth. Not to say that truth is solely subjective, but that finding elusive, objective truth is not for the weak of spirit or mind. Socrates taught with questions and reminded us that only by coming to grasp with our own ignorance do we scratch out the beginnings of wisdom. In the biblical history of Jesus of Nazareth, we observe that in all His recorded utterances, He answered directly only ten of the one hundred and eighty-seven questions He was asked. He related parables and stories. In those same scriptures He asked three hundred questions.

“Try to love the questions themselves like locked rooms and like books written in a foreign language. Do not now look for the answers. They cannot now be given you because you could not live them. It is a question of experiencing everything. At present you need to live the question.” Rainer Maria Rilke, “Letters to a Young Poet”

We have learned as a people and as individuals mostly by asking questions: the right questions. For those most difficult to understand questions, a lifetime, perhaps many lifetimes, are necessary, and the illumination of history helps. This is most difficult, for to understand our history, wisdom is learning what the events of history were to those who lived them, not in the revisionist light of our own interpretation. The corollary is also dismayingly true. As contemporaries within our own defining events, we don’t know how they will turn out; what the outcome will be in a hundred years or twenty of this cultural phenomenon or this movement of our rulers or this election, we cannot know.  Our understanding while living within these events is indispensable, and the decisions we make elucidated by that understanding equally so, but we cannot know, definitively know. We can surmise based on what has happened to others in similar cultural changes, making analogous choices perhaps. While consequences are to some degree predictable, absolute certainty is not ours to have.

“If they can get you asking the wrong questions, they don’t have to worry about answers.” Thomas Pynchon, “Gravity’s Rainbow”

“As you get older, the questions come down to two or three. How long? And what do I do with the time I’ve got left?” David Bowie

The final questions I leave to those much wiser than I.  From Hilaire Belloc’s brilliant book, The Great Heresies, “But sooner or later every human being who thinks at all, everyone not an idiot, is faced by this Problem of Evil; and as we watch the human race trying to think out for itself the meaning of the universe, or accepting Revelation thereon, or following warped and false partial religions and philosophies, we find it always at heart concerned with that insistent question: Why should we suffer? Why should we die?”

And from John Henry Newman: “On my deathbed, issues that agitate me most now will then interest me not at all; objects about which I have intense hope and fear now will then be nothing more than things that happen at the other end of the earth. They will have no life in them, those things that once consumed me. They will be as faded flowers of a bouquet that do nothing but mock me. What will it avail me to have been rich or great or fortunate or honored or influential?”

“Can’t help but wonder what’s happenin’ to my companions
Are they lost or are they found?
Have they counted the cost it’ll take to bring down
All their earthly principles they’re gonna have to abandon?”  Bob Dylan, “Slow Train”