“Best way to live in California is to be from somewheres else.” ‘No Country for Old Men,’ Cormac McCarthy 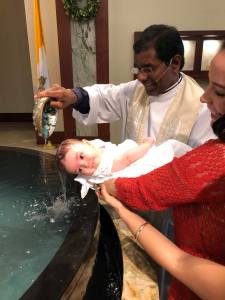 We came to Ladera Ranch for a baptism. And stayed for a while. Our youngest granddaughter, Adelaide, took the plunge. Her parents decided for her at five months of age, but the indelible mark for all eternity is the same. She seemed to enjoy the experience, and the lunch back at Marty and Meg’s house, catered by a local Mexican food restaurant, was superb. The beer wasn’t bad either.

Father Angelos officiated and impressed on the five sets of families present both the permanence of the commitment and the fruits of the promise. He is a lovely guy and a good priest at St. Kilian Church in nearby Mission Viejo. A large parish, each weekend the seven masses have full pews for the most part. The homilies are inspired and loving, but they do not lack authoritative teaching. No Catholic Lite at St. Kilian. He greeted each family, as he did when we attended Mass the following day on Sunday. Big choir, well led, mostly traditional; the whole congregation sang. I’d estimate over nine hundred at the Mass we attended.

Marty and Meg are most gracious hosts, and we enjoyed many nights of leisurely, healthy and delicious meals. Perfect balance really, as we took some side-trips to Selma’s (excellent) pizza and In and Out, my favorite fast food burger joint, complete with chocolate shakes and something called animal fries (don’t ask, but wonderful.)  Then there were Scott’s Donuts and Wendi’s Donuts, which in the interests of supporting local businesses, Marty and I felt we must patronize regularly.  Lots of walking trails in their neighborhood, which we enjoyed daily with Mila (the best puggle in the universe), Adelaide (the best five-month-old on the planet), Meg and Marty when he wasn’t working. Desert vegetation, a nearby deep canyon with steep paths and a mountain lion.  Mountains to the east.

“Soon it got dusk, a grapy dusk, a purple dusk over tangerine groves and long melon fields; the sun the color of pressed grapes, slashed with burgundy red, the fields the color of love and Spanish mysteries.”  ‘On The Road, Jack Kerouac

We took two side trips to Laguna Beach for lunch at the organic vegan frozen yogurt place, ‘Active Culture,’ with quinoa avocado salads, again to balance out the donuts. One Sunday, we all went for a long walk on the beach around sunset. Rita and I spent a relaxed afternoon at the Mission in San Juan Capistrano the day before the baptism with a sumptuous lunch of salmon for Rita and a creative grilled cheese sandwich and tomato soup at Sundried Tomato. But eating wasn’t all we did while we were there. Hours of conversation, watching Winter Olympics (at six o’clock instead of nine – just one of the West Coast advantages).  Adelaide prefers hockey and figure skating. She eschews curling, as do most human beings, except Scandinavians, the Scotch and the British. Enough said. 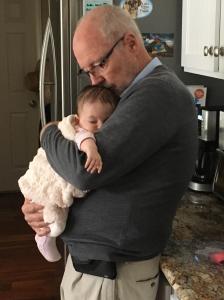 We shopped various times at ‘Buy Buy Baby,’ Whole Foods and a quick trip to Nordstrom’s bargain outlet to pick up the shirt and tie I forgot for the baptism. Walking around the store with a baby in the stroller was enjoyable, as were hours of holding that warm, sweet smelling tiny girl while she played, cuddled, goofed around and fussed. A couple of times she fell fast asleep in my arms. I think that is an experience that never ages.

For our birthdays (we both turned 72) Rita and I ventured north for three days. First to the Reagan Library in the Simi Valley, which has spectacular views, a full-size well used Airforce One, a Marine One helicopter, replica Oval Office, a piece of the Berlin Wall and hundreds of displays of videos and President Reagan’s papers from handwritten high school essays to his presidency. One oddity: the brand-new suit with a jagged hole in it that was cut off President Reagan in the emergency room after John Hinkley shot and almost killed him while trying to impress Jodie Foster.

The second day we drove from Oxnard where we were staying near the Channel Islands Beach up to Santa Barbara and the Franciscan Mission there. At a noon Mass, we received our Ash Wednesday ashes and blessing. Reminded by some displays in the museum, we remembered from San Juan the Abraham Lincoln – Franciscan Missions connection. During the bloody Mexican Revolution, the new radical secular government decided that it would benefit their connected families to confiscate Church land and give it to their friends, turning them into instantly wealthy people. Of course, it is not unusual in revolutionary affairs to outlaw worship and kill worshipers and priests, but Mexico rivaled its spiritual forebear in France for brutality. A few decades later, the Mexican government lost a war to America, and in settling accounts also lost California. Just a few weeks prior to his assassination, President Lincoln returned the missions to the Franciscans. Not all the abundant, arable land, which had been dispersed, but at least the churches and immediate surrounds for gardens, vineyards and orchards, which remain to this day; the old buildings extraordinary havens of peace. Mass has been celebrated continually in the Old Mission at Santa Barbara (under deep cover during the revolution) since Saint Junipero Serra founded it in the eighteenth century. The litany of the missions is a litany of the history of California: San Francisco to San Diego.

On the third day, we meandered without haste south down through Malibu and Santa Monica back into Los Angeles down the Pacific Coast Highway, with the hills and mountains to the east and the vastness of the ocean to our west with frequent stops along the way. One striking feature of our stay in Oxnard were the miles of fields and orchards of oranges, lemons and avocadoes. The fields were full of vegetables and flowers that are sold at florists and supermarkets throughout the country. Nothing quite matches a lemon or orange picked daily locally. New England has no answer to those, except to cede this ground and come up with its own Macintoshes and Red Delicious pretenders.

The fields were also full of migrant workers. Hundreds and hundreds of them. Without them, America would be impoverished, and not just for lack of fresh produce. At one of the local churches in Oxnard, the Ash Wednesday services were scheduled at 5, 5:30, 6, 6:30 and 7 AM for the workers to be able to attend. This striking reminder of the universality of the Church resonates still. What a marvelous, warm and friendly people live here to bless us all.

A final memory is the crazed drivers of the eight and ten lane suicide runs called freeways. A moment’s hesitation while a stranger tries to figure out a lane change or turn earns an instant amplified horn ten inches off the rear bumper, or a ninety mile an hour Porsche passing on the right like it was Le Mans. I know New England drivers, especially in Boston, can be rude, but Bostonians can be generally abrupt and impatient on or off the road, so this is not a disappointment when they revert to type on Commonwealth Avenue. Californians are replete with smiles and polite friendly replies and pleasantries, but get them into their automobiles, and they reveal themselves as sociopaths.

“Americans will put up with anything, as long as it doesn’t block traffic.”  Dan Rather