Pharming for Profit Part One

‘Not ignoring what is good, I am quick to perceive a horror, and could still be social with it – would they let me – since it is but well to be on friendly terms with all the inmates of the place one lodges in.” Herman Melville, “Moby Dick”

In a terrible hot summer when I was nine or ten, my mother did not allow her then five children out of the yard because the plague had come to my hometown, and no one knew what to do about it. No pick-up baseball games or stickball with a chalked strike zone on the cement of the school wall as we usually played almost every day. The town swimming pool was drained and closed with locked gates and warning signs. Life Magazine had cover stories and pictures of the paralyzed kept breathing through a tube loaded contraption called an “Iron Lung.” The patient victim was laid on their back looking up with only their head exposed, a seal around their necks and haunted eyes; a mirror was suspended at an angle attached to the mouth of the machine so they could see visitors.

The white and chrome gleaming artificial lung alternated pressure and non-pressure to fill and empty the lungs with an ominous repetitive pumping sound as it filled and emptied the chamber enclosing their body, reminding all with every pulsation of fragility and mortality. White and chrome cylinders the size of coffins with thick windows so the doctors could monitor the movements of the chest, but a harkening to the rack in a wicked baron’s castle troubled all who saw them. After the disease ran its course, some of the afflicted would regain their strength, some would die, and some would pass the rest of their lives with metal braces on their withered legs to enable them to get around. We’d see them lurching about and avert our eyes. Polio. Polio. Polio. Polio. Fear in whispered conversations among the mothers of the neighborhood. Like practicing by futilely ducking under our school desks for a Cold War nuclear drill, polio left a mark on all the children who went through that summer.

When Jonas Salk tested and developed his vaccination a year or so later, we lined up for the shots at the town Blackburn Memorial Hall.  All the school nurses administered them when we came back in the fall for any who had missed the first round. Jubilation. Freedom to roam and swim and play pick up baseball. Polio shots were added to smallpox inoculations with their telltale irregular round scar on our upper arms as regular immunization against that with which we had no other defense. Vaccinations. Miracles.

But something has gone amiss, and like all man-made miracles they can run awry with unforeseen, powerful consequences, especially when the miracles intertwine with political agendas, social engineering and money.

“This is the first time in medicine’s history the drug industry has placed at our disposal a powerful, disease-producing chemical for use in the healthy rather than the sick.” Dr. Herbert Ratner, so called Senate “Nelson Pill Hearings,” 1970

Dr. Ratner will reappear in a later post, and probably more than two for this is complicated. Drawing analogies between vaccinations and birth control pills will take some explanation, but for now, we will stick with the former and postpone the latter. But analogy does exist, and the implications are alarming. His quote almost fifty years ago was prophetic; limiting his observations to just the Pill was optimistic. What could be a better business model for big Pharma than producing something highly profitable for healthy people, not just the sick? There is a much larger market with the well.

Both before and after the polio terror, most of us developed normal immunity to what were called normal “childhood illnesses” through exposure, various rashes, fevers, swellings and outbreaks. I had them all: mumps both sides, measles, chicken pox and rubella, along with the usual panoply of flus, stomach bugs and fifty or so upper respiratory infections. During this rite of passage, we acquired for the most part lifetime immunity. Deaths from these diseases were very rare and usually in people otherwise compromised by poor health. I never heard of anybody dying from one of them; most, like me, rested quietly, isolated as much as possible in rooms shared with siblings with some books and a hovering mother bringing sweet drinks, Jello in our favorite flavor (I liked the red stuff) and whatever else we could stand until the symptoms passed. Our siblings usually wound up sick too. Sometimes we skipped a few days of school unless we were unlucky enough to catch one during vacations. If we developed a spectacular rash or swollen glands, there were pictures taken for family albums to torture us as adolescents at gatherings and with prospective spouses.

Vaccinations do not grant lifetime immunity in most cases and require booster shots (whatever that means) from time to time, which most adults do not get. Most adults in their thirties think they are fully immune because of their childhood inoculation, but they are wrong.  Childhood diseases incurred as an adult are more severe, more unpleasant and can carry more serious consequences. 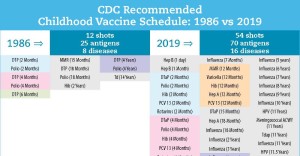 We had two vaccinations: smallpox and a combination diphtheria, pertussis and tetanus (DPT) in a few stages. Before we were two, we had five shots and never more than one in an office visit. Later came polio, first as shot, later taken orally.  In 1986, there were twelve shots. Today there are fifty-four with multiple shots for some and kids get up to five in one visit. Check the attached schedule. [i] What was when I was a kid a small part of the pharmaceutical industry is now almost twenty percent of their revenue and a fifty-billion-dollar monster revenue producer. And miracle of miracles for a business, the vaccine producers are indemnified against any losses by a Federal piece of legislation called the National Childhood Vaccine Injury Act of 1986. Can’t be sued. Skate free from any threat to their guaranteed profits. Any claims go into something called the National Vaccine Injury Compensation Program (VICP) that was set up after lots of claims had the pharmaceutical corporations threatening to stop producing them. The government in its capacity as grand nanny decided that the public interest was best served by covering the tail side of Big Pharma. Did you know that? [ii]More next time.

One more piece of data to mull over before the next chapter: the flood of children with chronic diseases [iii] breaks down like this: children born before 1989 when the new vaccine protocols vastly expanded are afflicted with a chronic illness at a 12.8% rate. Those born after 1989 are stricken at a 54% rate. [iv]Bet you didn’t know that either.

Hopefully without drawing the quick and understandable wrath of either the proponents or the anti-vaxxers and being immediately consigned to the crazies, we will explore this a bit more in the next post.  Please hold your fire until then.

“The truth is, of course, that Mr. Shaw is cruelly hampered by the fact that he cannot tell any lie unless he thinks it is the truth.” G.K. Chesterton. From the introduction to “Orthodoxy” about his good friend and frequent debating opponent, the Progressive, George Bernard Shaw.

[ii] Would be like if the car companies came up with a pure hydrogen powered car that fixed much of the CO2 emissions terror and fit right in with the anthropogenic climate change scare agenda. Trouble is in some very rare instances they would explode into tiny pieces, killing everyone in a 100’ radius. Then the government to push the progressive rock up the hill passes legislation to indemnify the car companies from damages, so that they’ll keep making the damn things. Far-fetched? Maybe. The good of the many outweighs the assured harm to the tiny few.

4 responses to “Pharming for Profit Part One”