“God sells us all things at the price of labor.”   Leonardo da Vinci

The first job that paid me was delivering newspapers when I was eleven or twelve. The tools were a large, double stitched, sturdy cloth bag, a list from the newspaper distributor, a zipped folder to track collections and hold cash and a bicycle.  Each day but one (because an adult with a car delivered Sunday), the truck from the newspaper distributor would drop a large bundle of afternoon papers at the corner of our street. I would unfetter them and put them in my bag.  My route consisted of four streets and around forty stops. There were five papers of varying design and thickness: the Boston Globe, the Boston Evening Traveler, the Boston Record American in a tabloid format, the Walpole Times delivered by subscription on Thursdays and the Norfolk County Free Press free to everyone on Fridays.  Almost all customers took one of the Boston papers and most took the Walpole Times, a weekly local paper.  Everyone took the Norfolk Free Press, but I suspect most took it to look quickly for grocery specials, if any neighbors were embarrassed in the police blotter or to train puppies and line bird cages.

Most papers were left between the storm door and the inner door, front or back per the customer’s preference.  Saturdays, I would go to each house and collect payment, then bike down to the distribution office and pay my paper bill. If the tips were good (ten cents a week from a customer was good), I’d net seven or eight dollars, a princely sum for a twelve-year-old in 1958. A non paying customer who refused to answer their door was on me. Wet, beat up or late papers earned me a reprimand from the distribution manager who took all complaint calls. More than a couple of these, and I would be without employment.  I learned that promptness, diligence and friendliness along with a clean paper without blemishes earned me the most money. Ironically years later, I was back in the business with the daily Patriot Ledger for which I worked as a local stringer, writing columns about town politics and events.

The next rung up the ladder was climbed when I gained the strength to carry two golf bags by caddying on the local course. Getting a double would earn six or seven dollars and three to four hours of work depending upon the skill and patience of the customers. Most days I spent waiting for customers, and some days came up empty, playing desultory cards in the caddy shack, practicing spitting and obscene language, innocent of its real meaning.  If I only had a single bag with another caddy and a couple of golfers pulling their own wheeled carts, I could work a whole day to make three or four dollars, five with a good tip. I learned patience, getting along with older caddies, remaining calm and helpful with manic and demeaning customers and expanded my vocabulary considerably.

“No man e’er was glorious, who was not laborious.” Poor Richard’s Almanac, Benjamin Franklin

Next came one miserable summer when I turned fifteen as a bundle boy at the local grocery market, a branch of the Atlantic and Pacific Tea Company (the A&P).  My tools were an A&P apron and company supplied paper bags and metal framed, pressed board carts that would roll on a wheeled manual conveyor through an opening in the front wall to a similar conveyance for pick up by the customers in their cars. Some days I would pack bundles and send them on their way; others I would be outside under an inadequate canopy, which protected no one from windblown rain. Very occasionally there would be a tip. Otherwise it was $1.15 an hour and accommodating unhappy front of store managers and customers. I learned how to pack a paper bag, the heavier items on the bottom, squaring off the bag with lighter items on top to not overload one. A ripped bag with groceries on the ground was liable to get you sent home without pay. I learned to come to work on time, work steadily, try to help the beleaguered cashiers and occasionally clean up a spill in aisle six. 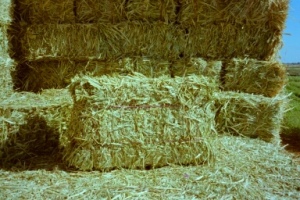 The penultimate job of my young life was haying for Ma Green on her dairy farm in West Walpole the next summer. A dollar an hour for agricultural work, but cash without denuding the take with the government’s cut.  Two or three of us would follow a tractor drawn wood cart around freshly mowed and bailed fields, loading and stacking hay. Once the first level was built on the cart, the lead hay worker would mount the cart and stack them high. The farm manager would pace the work driving the tractor.  When the cart was full, we would ride on top of the hay back to the barn and load the hay into the loft. No breeze there, hot, sweaty work with hay dust covering our bodies and clothes. I loved the camaraderie, the banter and the feeling of aching muscles and a shower before supper. Sunburns all around until we tanned, we labored without shirts and started to build strength with its accompanying physical confidence to last a lifetime – a grown up job, a man’s job, a wonderful job with lunch under a tree shared with my fellows.

“Heaven is blessed with perfect rest, but the blessing of earth is toil.”  Henry van Dyke

These jobs preceded many others over my younger years: tree pruning and topping, fence building, house framing, landscaping, truck driving, asphalting driveways, working in a concrete factory making septic tanks and pipe sections and others.  Not one of them failed to teach me something about work, co workers, bosses and subordinates. They prepared me to manage many lumberyards and commercial construction subcontracting.  We’ve raised a family and four children, educating them to the best of our ability, all enabled by ennobling work. All my jobs led me to a lifelong appreciation and respect for those who earn their way with their hands, their backs, their daily courage and commitment, their diligence and skills. “A hand that’s dirty with honest labor is fit to shake with any neighbor,” rings true to me, bespeaking the dignity of work.

I would be disappointed not to see some exceptions for new or young workers from minimum wage laws that might preclude employers from being able to afford and hire inexperienced, but hopeful employees. Such employment teaches us to show up on time, to respect ourselves, our employers and fellow workers; we learn that faithfulness to small tasks leads to larger ones and the ability for self determination and opportunity.  For this there is no substitute.

“To labor is to pray.”  Motto of the Benedictines