Brothers in the Morning

“Remember upon the conduct of each depends the fate of all.” Alexander the Great 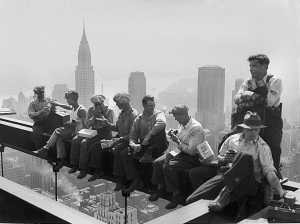 Last week on a cold early morning with a sharp wind coming up from the bay, I stopped at my favorite coffee watering hole where a small crew has been framing an addition in the back of the restaurant. Two of the carpenters were walking from their pick-ups parked in back, dressed for the weather, gloves without fingers, tool belts over their shoulders, talking quietly with easy familiarity.

I remembered thousands of mornings that began each day with similar working friendships: fence crews, carpenter crews, landscape crews, workshop crews of various kinds for fabricating doors, windows, cement forms, nailing pickets on fences, and most especially and fondly tree climbing crews. So many tree climbing crews, large or only two or three men, in Massachusetts, Maine, Colorado and Rhode Island. Convivial or occasionally contentious, we mustered each morning in weather fair or foul, and set about doing something together that needed doing.

We rarely spoke of politics or the news and never in meaningless loaded bludgeon words like inclusivity or diversity or multiculturalism; we talked about the coming tasks that day – the seventy-foot dead silver maple hanging over a swimming pool or roof or power lines, and how to get the damn thing safely on the ground without injury to property or persons, about chainsaws and handsaws, peaveys and winches, ropes and knots, solid high crotches in the tree to tie into, safe and central. We spoke of trucks, saws and chippers that broke down and trees that had almost killed us. We talked about wives and girlfriends and children and good looking waitresses and beer. In the trucks on the way to the morning’s job, we planned for and complained about the cold, the heat, the wind, the rain, the snow and ice. Sometimes we bemoaned the previous night’s disaster for Red Sox, Bruins or Patriots, or we celebrated a hard-won victory and the miraculous catch the center fielder made climbing the wall to save the game and how the bull pen finally closed out the late innings with no damage.

We spoke of real things, not in slogans, not cant and constructs, but in clear sentences to convey to one another our thoughts, hopes, fears, lives and plans.

“Sticks in a bundle are unbreakable.” Kenyan proverb

The more experienced taught the new guys, and, of course, some mentors rode the rookies derisively for their lack of skills. But they watched out for them, nonetheless. Stopped them before they fell or cut themselves (or their ropes). The rough humor was constant. I remember getting into trouble about forty feet in the air with an ill-advised decision that left me dangling precariously. My foreman Bill yelled up that since Rita was such a beauty he and others on the crew would make sure to go over to console her if I couldn’t get myself out of the mess I was in.  Another day when I was coming down with my rope securely tied in, Bill lay in wait because I was coming down in an open area well clear of the trunk of the tree. He sprung from the bushes and grabbed my rope. With a quick expert roll, he wrapped my feet, preventing further descent. Then he spun me until I was horizontal and my mouth snapped open with centrifugal force.

The jokes were part of the training, training in skills, knowledge and teamwork. When the foreman issued an edict, debate was not considered. The seniors knew what they were about and taught as they had been taught, and their teachers before them. Bill was a gifted athlete and a savant climber, respected and liked. He taught neophyte climbers like me how to fall if necessary (he was a veteran of the 101st Army Airborne) and more importantly to avoid falling. Tension would build in the crew when truly unnerving challenges arose. Bill had a gift for defusing fear and self-focus; it was about the team, covering each other, keeping an eye out for each other’s safety, the ground men making sure the climber’s lines were never tangled in brush should he need to get out of harm’s way in a hurry. Lunch might include rock throwing or axe throwing contests, foot-lock climbing for height and time, arm wrestling or story telling of demented tree felling events in the histories of the more experienced.  The stories always had lessons.

Men have learned and worked together in such crews, each person with a necessary role in the team, since they hunted with spears and clubs. Worker’s guilds and medieval artist guilds evolved from those groups. The first universities were born of these patterns of order based on experience and talent; the teacher’s organization and the masons who constructed the buildings were so modeled. Men relate differently to and with each other in such crews than they relate to women or in mixed gender gatherings.  For those who have not experienced that brotherhood in crews, teams, the military, it cannot be fully understood.

“The anthropologist Lionel Tiger, in Men in Groups, earned the wrath of feminists when he suggested that men had been primed by the exigencies of the hunt to form hierarchically organized groups, with each man performing a particular task, all of coordinated in a team movement to bring down the mammoth or the wild boar. Some feminists countered by saying that women too had to form groups in order to locate and gather berries, which was a strange way of proving Tiger’s point. Berries do not run forty miles an hour. Berries do not have antlers, hooves or fangs.” From the section, “The Triumph of Brotherhood” in Dr. Anthony Esolen’s latest, “Out of the Ashes: Rebuilding American Culture”, which I highly recommend.